Matthew Caulfield, W’16, GW’20, transferred to Wharton in his sophomore year and stayed to pursue a PhD in Ethics and Legal Studies. His involvement in election tech research has made him a spokesperson at national conferences.

Although Matthew Caulfield, W’16, GW’20, spent the first year of his undergraduate education at Georgetown University in Washington, D.C., he didn’t delve deeply into the study of public policy until after he transferred to Wharton in 2013. With support from the Wharton Public Policy Initiative (PPI), Matt returned to D.C. the summer after his sophomore year to work at Third Way, a centrist think tank, in their Capital Markets Initiative.

“The Initiative focuses on explaining financial instruments and concepts, such as derivatives or bank liquidity, to D.C. policy professionals,” Matt said. During his internship, he co-authored a report on Bitcoin’s monetary features and also contributed to a paper on the Financial Stability Oversight Council’s designation of systemically important financial institutions. “My internship exceeded my expectations. I was given the opportunity to do real policy work. It was a wonderful experience.”

Why Continue With a PhD?

As Matt was finishing his undergraduate degree at Wharton, a private-sector firm asked him to join their two-year executive-training program as soon as he graduated. However, he ultimately decided to stay at Wharton and pursue a PhD in Ethics and Legal Studies, in preparation for an academic career.

“I thought getting paid to read and write about whatever I’m interested in sounded like an amazing career option and I’ve always enjoyed teaching,” Matt said. His interests lie in business ethics — issues “at the nexus of economics, management, law, and philosophy.” For Matt, this combination provides “a full outlook on how businesses can, do, and should operate.” Currently, he is finishing a dissertation entitled “None of Your Business Ethics: A Defense of Secrecy in Business” that examines the ethics of secrecy in firms and markets.

Becoming an Expert in Election Technology

While forging ahead with his dissertation, Matt has also been serving as the Principal Investigator for a research project to update PPI’s 2016 study of the election technology industry: “The Business of Voting,” sponsored by PPI.

Matt was part of a team of six students who contributed to writing the 2016 report, which explores the ways in which the industry’s structure inhibits innovation from developing more reliable, accessible, and secure voting machines. He got involved with the study because he saw it as a chance to combine economic, strategic, and policy analysis.

He became the spokesperson for the study and earned opportunities to present its findings at multiple conferences, including the Global Election Technology Summit and National Conference of State Legislatures. Matt was also invited to serve as an expert to the National Academies of Sciences, Engineering, and Medicine’s Committee on the Future of Voting.

“Being treated as an expert in election tech markets has been both flattering and somewhat alarming,” Matt said. “The fact that I, beginning as an undergraduate student, have become one of the main commentators on election technology markets points to how little market-oriented commentary currently exists.”

As Matt enters his seventh year as a Wharton student, he is busy applying for academic positions and deeply appreciative of all that the School has enabled him to achieve.

“Wharton has made me feel more and more comfortable with piercing traditional disciplinary boundaries. Deep engagement with philosophy, management, and law is not only possible but hugely valuable.”

“The Wharton name has been instrumental to getting different stakeholders invested in our project, and the resources offered by the Wharton Public Policy Initiative have allowed us not only to conduct this research but introduce it to most major groups working in this area.”

This story was adapted from a profile originally published by the Wharton Public Policy Initiative. 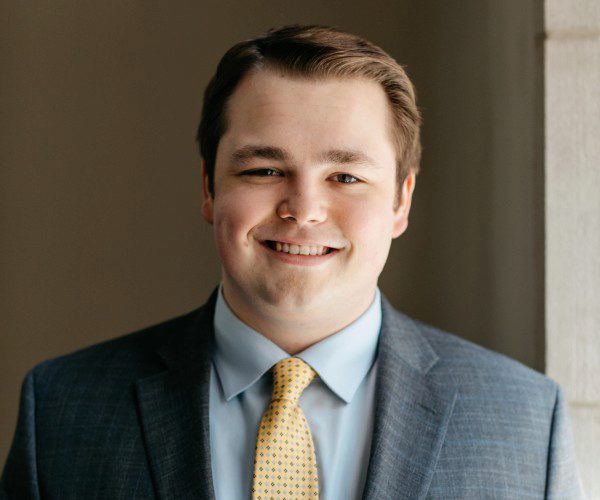 Matt was an Executive Editor of the Penn Undergraduate Law Journal and also wrote for its popular legal blog, The Roundtable. He served as co-chair of the University Honor Council. Additionally, he was involved with the Penn Government and Politics Association in several ways — as Treasurer on the Executive Board, a member of the Polybian Society, a writer for The Spectrum, and Whip of the Liberal Caucus of the Penn Political Union.

Matt was a vocal soloist in the Penn Baroque Ensemble and a member of the Penn Singers Light Opera Company.