Building Community and Connection with Women in Business Academia

Second-year doctoral student Esther Uduehi, president of the Wharton Society for the Advancement of Women in Business Academia, talks about life as a PhD student.

Since joining the Wharton Marketing Doctoral Program in the fall of 2016, Esther Uduehi has made a home for herself on campus and in Philadelphia. Shortly after arriving, Esther became involved with the student-led Wharton Society for the Advancement of Women in Business Academia (WSAWBA).

Now as its president she helps lead WSAWBA’s signature program — the annual Women in Business Academia conference. The group will celebrate its fifth anniversary as a space for female faculty and students to connect and discuss their identities next spring.

In addition to her work with WSAWBA, Esther’s marketing research focuses on consumer behavior, branding, signaling, and luxury consumption. Most recently she has explored different language choices as it relates to people with disabilities. We sat down with the former high school math teacher and Indiana-native to discuss the advice she has for prospective students, her favorite parts of living in Philadelphia, and her doctoral experience thus far.

What research are you focusing on during this year?

I felt that Marketing was going to allow me to have this flexibility in terms of the questions I was going to answer. I can answer questions about identity and I can answer them from a retailing lens or from a broader social psychology lens, and so I felt that Marketing would allow me to play around with the different types of ideas and topics that I might not be able to do in other fields. That was really important to me.

What are you currently working on?

The project that I’m working on currently dealing with is about disability identity labeling. What language choices do we make when we’re describing someone with a disability? For example, if someone has dyslexia, when do we refer to them as a “dyslexic person” versus “a person with dyslexia” versus if we’re talking about someone who has obesity. When do we say an “obese person” versus “someone with obesity”? And what I’m finding interesting about that is that the different language choices that we make have a lot to do with blame and control. How much blame and control we prescribe to a certain disability has a lot to do with the language choices that we make.

What advice do you have for someone in the PhD application process?

It’s a privilege in some ways to be able to go through the process of writing personal statements and reflecting on life. You should really take the time to enjoy that. Reflect on what’s gotten you to this point where you want to pursue a PhD then enjoy that process. You’re going to be doing the PhD for at least four to five years and you’re not necessarily going to be in a reflection stage anymore. Really just taking the time to enjoy the privilege of reflecting on your life. I think I would have done that a bit more because it allows you to really gain momentum as you go into whatever program that you choose and thinking about what you want to do for the future.

What were you working on before you came to Wharton? Why was pursuing a PhD the best choice for you?

I have a non-traditional path. My undergrad degrees are in Math and Chemistry. I started my PhD in Chemistry at the University of Oxford and then decided that I wanted to pursue a different path. And so I took time away from the PhD world and became a teacher for a few years. Through that process, I realized that I really wanted to get back into doing research. That’s when I discovered the Marketing path and I felt that that was going to allow me to answer questions that interested me that were broad and that focused on identity and included statistics.

What’s the value of student clubs within a PhD program?

We’re one of the only women groups in the nation that focuses on business PhD students, so I think it was a unique opportunity which I wanted to take advantage of. For WSAWBA, our major event is our annual conference. It’s one of the only, if not the only, conference that focuses on women in business academia. It brings students and professors from around the nation to not only talk about their research but also about different aspects of the PhD life that are important to women. My big goal is to expand upon that and make sure we continue its legacy. I think that we just want to make sure that we have the strongest foundation moving forward in that conference.

How have you found Philadelphia as a place to live?

My husband and I were moving from New York. We were living in Manhattan so we were used to the hustle and bustle and we never visited Philly before. When we came, we were pleasantly surprised to see that Philly is everything that’s nice about New York with less noise, less traffic. You don’t really have to compromise a lot on the aspects of New York or big city and that’s what I really like about Philly.

I think we really enjoyed how Penn had this large campus and then you also have the city element. I didn’t want to lose the city element because that was something that I really loved about being in New York. Philly offers the best of both worlds. 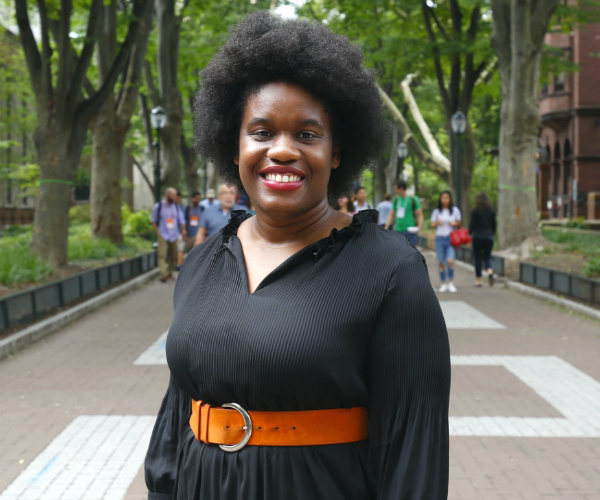 At Wharton
President, Wharton Society for the Advancement of Women in Business Academia